Customer satisfaction in the Middle East

Lombardi and its customer satisfaction in the Middle East. Synchroline, a flexo machine from the Italian company Lombardi Converting Machinery, has been chosen by one of the most important printing companies in Jordan, after a careful evaluation among five international suppliers.

In an increasingly global world, internet and social media have become an effective business tool. This is illustrated by an Italian case study that revolutionises the market of label machines.
Lombardi Converting Machinery, an Italian company based in Brescia, between Milan and Venice, that for years has specialised in high-precision flexographic narrow-web presses, decided to establish and expand their presence in foreign markets using social media, in particular Twitter.
And there were rapid results. Among these, the first sale of a Synchroline 330 to Amman, Jordan. This flexo printing machine is characterized by a smart setting and maintenance and control of the printing register, that adjust in real time any micrometrical deviations, allowing for print on a variety of materials such as BOPP, PVC, PE, PET, paper, adhesive or thermal paper, cardboard, laminates etc.

Engineer Khalil Muhaisen is director at the Jordanian company Computer Forms Co., which most likely is the largest business forms printing company in the country. They provide banks, airline companies, health sector and governmental institutions with printed forms. Mr. Khalil Muhaisen looked at buying their first flexographic press to complement their existing six web offset presses at their production site. While researching on the internet, he discovered Lombardi Converting Machinery and their flexo presses, which he compared with several competitive offerings on the market.

Jordan Computer Forms Co (JCF), founded by Radwan Mohaisen in 1987, specialises in forms printing. The company startet with a small single colour offset press. Within a few years, JCF was the specialist in Jordan for printing bank checks, flight tickets and boarding pass, banks ATM secret number envelops and security printing on thermal paper, cash register rolls. The production grounds increased from 3000sqm to 6500 square meters. Today, the company has six offset machines and employs 70 staff.
The success of JCF is based upon the conviction that “business deserves and has to expect the superior level of services and integrity from their vendors and business partners”, and upon this ambition of the company’s founder, Mr. Radwan Mohaisen, it set out to become Jordanian biggest papers converting company.
JCF’s spirit of innovation at every level is clearly focussed on exceeding every customers demand and to deal with honesty and integrity. Progress is echoed by the country’s requirements, and the company improved and expanded their activities. Thus, they decided to implement a new advanced and updated flexo machine as an answer to increased demands for print on many different substrates, including paper and synthetic flexible films among others.
“As a company“, Mr Khalil Muhaisen says, “we believe that working closely with our customers and suppliers is an essential element of getting the job done properly. We work as a team which enables us to get the job done quickly and professionally. The dynamic market changes and changes in technology, that have occurred especially in the paper converting industry, have been so rapid that it is hard to predict what the coming years will bring about.”
The main mission of JCF is to provide protection and financial security for the highest quality product at a competitive price.
Being specialised in printing of checks and bank documents, pass, permits and flight tickets, Khalil Mohaisen examined market offers for his first flexo press – not only from a technical point of view. He also put much emphasis on the supplier’s personality.
After carefully evaluating offers from five different vendors, and orientating himself towards Lombardi’s Synchroline 330, he wanted to learn more about the press and the company.
After discussions with engineer Claudio Lombardi he visited the company in Brescia where the technicians examined the Synchroline thoroughly. They were positively impressed by its features and functionalities, and notably its register accuracy, fast set up and job exchange. JCF deems the Synchroline 300 superior to all the other offerings in the same category taken into consideration.
The purchasing decision was made in April 2015 and delivery was determined for end of the same year. 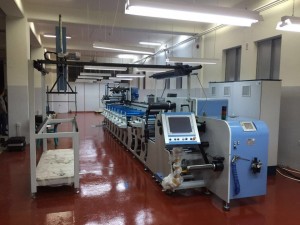 We met Mr Khalil Mohaisen at Lombardi’s booth, at Labelexpo in Brussels in September 2015, where he visited with some of his employees and colleagues to show what he called “the great flexo machine Lombardi” referring to the Synchroline 530 showcased. He highlighted the precision by which the press automatically registers.
The Synchroline 330 at JCF went into operation in early 2016 to the full satisfaction of the operator, who got hired by the company for his expertise on flexo machines: He said, that he had never worked on a press that is so easy to set up and operate – thanks to the intuitive software that controls all operations from setting up the register to print till rewinding – and the cutting-edge technology resulting in unparalleled user friendliness.
One of the strengths appreciated by JCF are Lombardi’s flexible contacts for technical education and its assistance network. Thus Lombardi can be considered as being just ‘around the corner ‘. For this reason Eng. Khalil Mohaisen also wanted a visible Italian flag plate on the machine to stress that it was ‘Made in Italy’.

In the picture above: Khalil Muhaisen, director from Jordan Computer Forms (JCF).
____________________________________
* Lombardi Converting Machinery was founded in 1986 by ing Claudio Lombardi for production and distribution of automatic punching machines for labels and envelopes. It then specialised in flexographic central drum and narrow web flexo presses.
With its international experience on top of high quality production, nowadays Lombardi is a world wide supplier to the flexographic community that has an established base of more than 1,300 installations in over 100 countries. With its cutting-edge technology, Lombardi set a new standard in converting and printing, thanks to its research and development in market-leading solutions. Its presses are recognised for precision and user friendliness by label printers all over the globe.