Innovative SteppedHex technology of anilox rollers and a new direction in sales give Zecher GmbH an extra spurt of growth.

Things are going well at Zecher GmbH. Sales figures are up, and the newly developed SteppedHex engraving, which the Paderborn (Germany)-based supplier presented at last year’s Drupa trade fair, is creating more and more interest. Specialisation in the company’s core product of anilox rollers and consistent implementation of a proactive sales strategy form the basis of this current success. This is reflected in, for example, the company’s sales for the past year of 2016, which grew by 12% in the twelve months concerned. In this article, Jörg Rohde, who is Zecher’s Head of Application Technology, explains what lies behind the development of the company’s new SteppedHex technology, while Head of Sales Thomas Reinking tells us more about the context of the current success in sales.
The foundations of today’s success can be traced back to 1948, when Kurt Zecher originally founded the firm. Operating as what would nowadays be termed a start-up entrepreneur, he ran a small workshop specialised in hard chrome plating. Enquiries from the printing sector ignited his pioneering spirit, and by 1950 he had produced the first regularly engraved anilox roller. Since then, the firm’s development has been based wholly on anilox rollers, of which the Paderborn-based company produces approximately twelve thousand units annually. All production takes place in Paderborn, where the company employs a workforce of 170 persons.

Ever since the Zecher Company launched its first laser-engraved anilox roller in 1989, this technology has become widely recognised as standard. Engraving with a diamond-tipped tool nevertheless remains in use for certain applications. As a result of all this, the company’s production facilities now include a total of seventeen laser-engraving machines, along with ten mechanical units.
When ceramic anilox rollers first came into use, cells tended to be aligned at an angle of 45°, as was the practice with chrome rollers. The hexagonal format, which works with an angle of 60°, has nevertheless become more common over time. One advantage of this type of engraving is that it minimises the risk of moiré patterns forming during halftone printing. There were also repeated attempts to make use of cross-hatching, particularly known in the area of coating techniques, for the printing of flexible packaging items.

Laser engraving paves the way for alternative cell geometries.   As cross-hatching entails both benefits and disadvantages, there have been long-standing efforts in the sector to apply the possibilities of laser engraving to alternative cell geometries, and several relevant suppliers market corresponding products with a variety of designations.
The development of a new engraving presents an important challenge, given the multiple factors and various physical requirements that need to be taken into account.
These may include: ink transfer, which is normally determined by the filling and emptying characteristics of the cell,
the mechanical stability of the engraving, which is for example needed to guide the doctor blade, the geometric arrangement of the cells, which must correspond to the various screen angles arising from reproduction, the suitability of the cell’s shape for engraving onto a cylindrical object in an endless and seamless way, the use of all commonly employed types of ink, such as those based on water and solvents and those designed for UV-dried inking systems, along with all common printing machine configurations, and compatibility with any type of printing where the tendency to use ever-finer screening and pattern details demands special requirements in terms of the ink-transfer performance of anilox rollers. 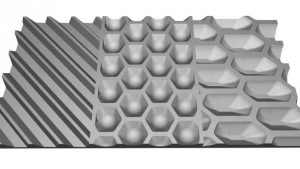 Zecher GmbH has developed, with SteppedHex, a free-standing cell geometry that fulfils all the requirements in the list. The name of the product reflects the stepped arrangement of the cells, which are organised in groups of three (see fig. 2). The “omission” of the adjoining walls of three cells lying on a given radial line creates the open engraving and typical offset of SteppedHex technology, with its German registered-design status.

The company has invested several years of intensive work in the development of its new SteppedHex technology. This has involved cooperation both with industrial partners and selected users of the firm’s products. The latter, in their role as “beta users” put the anilox rollers through their paces over a long period of actual day-to-day operation. One of the initial test markets was the field of narrow-web UV flexo printing. It is for this reason that some of the label printers involved have now been using this anilox roller technology successfully for more than three years. The project then went on to cover the market for flexible packaging and other segments, such as pre-printed corrugated cardboard.
The lengthy test phase ensures that printers can work with SteppedHex as part of a proven existing system that has fulfilled previous requirements without problem, but which is now open to new opportunities. These include such benefit as better-quality flexo printing, often involving anilox rollers of a higher resolution. The challenge in this case is to transfer the same volume of ink, despite the finer quality of the engraving. This balancing act succeeds thanks to the open engraving of SteppedHex technology. “The increased fineness of the line resolution is compensated for by the open nature of the cells”, explains Jörg Rohde. “This permits the use, depending on line configuration, of SteppedHex anilox rollers that increase resolution by 80 to 120 – and sometimes even 180 lines per centimetre – without any of the loss of volume typical of hexagonal engravings.” 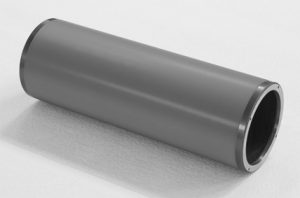 Most anilox rollers are supplied in the form of anilox sleeves

Jörg Rohde uses the example of a conventional roller with a resolution of 160 L/cm to illustrate these effects. The maximum volume of this engraving is comparable to that of a SteppedHex roller with a resolution of 240 L/cm. This increase of 80 lines in terms of screen resolution has the advantage of homogeneous ink transfer, and therefore of uniform colouring of the printed item. This improves the representation of fine detail, but still makes available the volume required for the printing of the surfaces concerned.
Improved emptying and cleaning performance. 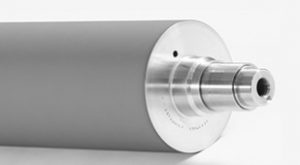 Conventional anilox rollers remain in use in many areas of application

The afore-mentioned is also supported by an open engraving structure; with fewer cell-walls, adhesion powers which usually retain a proportion of the ink in the cell, are diminished. The cell geometry, consisting of groups of three cells that each form a shape reminiscent of a bathtub, is beneficial in terms of cleaning performance. This aspect is of increasing importance, given that most modern printing machines are equipped with automatic cleaning equipment.
The fine resolution of SteppedHex engraving lets it deliver yet another benefit: in the shape of its high basic stability, which ensures smooth and efficient application of the doctor blade.

Growing interest on the market

Anilox rollers have raised quality standards right across the flexo printing sector in recent years. The products offered in this respect were largely similar. The Zecher Company has managed, with the development of its new SteppedHex technology, to offer technical product advantages to users of anilox rollers. This gives its worldwide sales organisation, which includes 60 representatives, a valuable unique selling point. The product’s attractiveness is enhanced even more by the fact that the price-to-performance characteristics of this new engraving technology are comparable to those of conventional anilox rollers.
Market interest in SteppedHex is therefore correspondingly high. Ever since it was first launched at the Drupa trade fair in May 2016, the level of demand has grown in parallel with the number of items delivered. Special test rollers are being made available to manufacturers of printing machines and printing companies alike, and an OEM customer has already completed an extensive range of test prints with SteppedHex rollers. All this has shown that, among other things, the typical worries about open engraving possibly leading to the transfer of excessive quantities of ink, along with the concerns of many print works regarding inefficient drying, are unfounded.

Communications with the printers 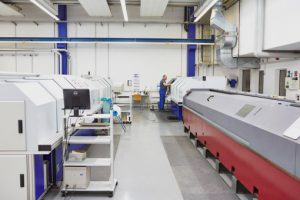 The estimated 90% of orders that are now handled directly via the sales organisation likewise translates into a considerable advantage for the department of Application Technology. “The streamlining of our sales procedures has permanently taken the pressure off our specialists in the field of application technology”, explains Thomas Reinking. “They only have to go into action nowadays if customer requirements exceed the expertise of our colleagues in Sales; a scenario that applies in just one out of ten cases.”
This means that the valuable resources of the Application Technology team can be significantly better-targeted, which in turn translates into a jump in the quality of advice regarding their field of expertise.
This new approach means that the Sales team must be able, to a certain extent, to provide technical advice and support – a truly demanding task, given the wide variety of uses that anilox rollers can be put to. This is made easier by the “specifications pyramid” that the Zecher Company first made public at the 2012 Drupa trade fair. This tool developed by the company in-house has since become a proven and coherent way of matching an individual application to the right kind of engraving.
This new SteppedHex technology is a star addition to the catalogue of Zecher GmbH. While previous products were normally anilox rollers designed for specific purposes, SteppedHex is an alternative concept that breaks the bounds of individual applications. What this means in practice is that users can cover all their needs with a single system, should they wish to do so. As SteppedHex is not restricted to individual fields of application, it can be used to deliver benefits to printers dedicated to high-quality halftone work, those dealing with line-halftone combinations and even those producing white blanks.
Zecher GmbH has managed to convert its SteppedHex technology and new sales concept into the foundation stone of healthy growth, and is now set to break into new markets. One example is North and South America, where the company spent the autumn of 2016 acquiring new partners for its distribution network.