Emiliano Pescarolo is the winner of the seventh edition of the Genoa Pesto World Championship. The World Champion 2018 is 39 years old, lives in Genoa, was born in Garbagnate milanese and he is a diver.

A fellow of Metaprintart participated at the Genoa Pesto World Championship for the fourth time in the seven editions. Among 100 challengers coming from everywhere in the word – United States, Brazil, South Africa, Lebanon, Hong Kong out of Europe – Roberto Mercati, sales manager of Metaprintart, is a veteran of this championship and for the second time, he won the first selection (1 on 10) and participated to the final among the ten best handmade pesto sauce. His ‘pesto’ won the first round due to the ‘equilibrium among the elements’, further the perfect milling refinement.
In fact, the preparation requires maximum 40 minutes. 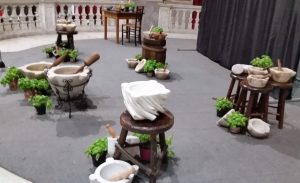 The exhibition of old, and one modern artistic, mortars

Genoa Pesto is a very old and popular sauce originally based on basil, olive oil and pine nuts. During the years Parmesan and Sardo cheese were added. An ancient recipe is: “Take a slice of garlic, basil (baxaico) or marjoram and parsley, a mix of grated Dutch cheese and parmesan cheese and pine nuts: using a mortar and a pestle grind all those ingredients with a little butter until you get a sauce Melt it with some olive oil. With this sauce you can season lasagne, gnocchi (troffie), making it more liquid by adding hot water.”

But today pesto is completely different: 4 bunches of fresh PDO (Protected Designation of Origin) Genoese basil, which guarantees high-quality taste and flavour; 30 g pine nuts; 45-60 g aged Parmesan cheese, grated; 20-40 g Fiore Sardo cheese (Pecorino Sardo), grated; 1-2 garlic cloves from Vessalico (Imperia); 10 g coarse marine salt; 60-80 cc PDO extra-virgin olive oil from the “Italian Riviera”, renowned for its sweet and fruity taste, which adds flavour to the basil and dressing. Of course the difference for the results is in the quantities and the equilibrium of the ingredients. The preparation must be done as quickly as possible to avoid oxidation problems.  But this is not the only possible way to make pesto. 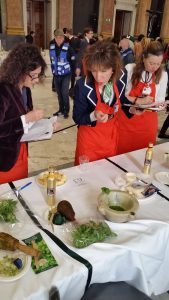 The difficulty to evaluate the results

rest of the world. It is a historical excellence of food culture and a style of life and conviviality that requires knowledge, skills and abilities that must be defended, in other words, Genoese Pesto is a cultural asset to be safeguarded and enhanced. In Genoa and Liguria each person has a secret to this recipe: you will never find two cups of pesto that are the same.

For this seventh edition has been promoted the candidacy of Genoese Pesto prepared using marble mortar and wooden pestle at the Italian National Commission for UNESCO as a best practice of humanity’s intangible cultural heritage. To support the application, click here!

If you are part of a group or an association and want to join, write to info@pestochampionship.it 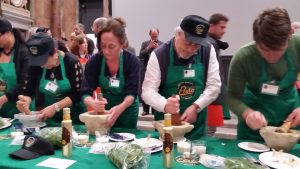 The finalists: from left the Lebanon and Brazilian competitors, Roberto and Emiliano

After the non-competitive exhibition of kids, the World Championship.  Emiliano passed the first selection (from 100 competitors to 10 finalists) and then won against the other nine finalists.   The other finalists are Roberto Mercati, Monica Piancastelli de Siqueira (Brazil), Maura Turchi, Paolo Pizzorno, Samira Zgheib (Lebanon), Gianni Baghino, Romina Serena Brazzi, Massimiliano Cresta, Sabrina Fattorini.
Five of them are from Genoa, one of them was born in Belo Orizonte and another one is Sardegna, two are from near Milan (the winner and Roberto), one from Lebanon, one from Tuscany and one from Liguria out of Genoa.