A new concept of digital platform

Gate is an innovative digital printing platform with a revolutionary and unique concept to implement following the real customer needs for an integrated printing production.

Digital printing for industrial production is in rapid evolution, as we got to touch in the two events that dominated the European trade fair in November: Inprint in Munich and the ITMA 2105 in Milan.
ITMA Milan – the event of the year for the textile industry, marked the absolute affirmation now digital printing on fabrics (for specific articles please visit in our magazine Meta in Italy).

Inprint, a fair dedicated to the printing industry, marked the birth, as a surprise, of a new platform designed and built in Italy.
We say surprise to reason, since up to now the company that launched this novelty, JetSet Industrial, is building machines and solutions for OEMs, but is best known for its high level of experimentation in the field of inkjet ink, so to attract the attention of corporations that have always entrusted the search for new solutions.

So why today JetSet comes out with its own machine?
«Because if we want to be precise – says Sergio Ferrari, CEO of the company – Gate is not a machine in the sense that we usually give to this term. Gate is a digital platform, conceptually new, based on modular components, that can be made according to the real and specific needs of the customer.»
Just to play devil’s advocate, I would point out that this concept we always felt by the suppliers of technologies, which have never suppliers, but partners, who do not sell cars, but provide solutions and so on.
«Just for speaking, this is true – insists Ferrari – but the reality is often quite different, as attested by those companies who have purchased a ‘solution’ being at home a ‘machine’, very good, but still a car that does not always integrates optimal in the production process.»
In fact this is an observation that we have recently heard from a business owner who, perhaps exaggerating, he complained that he had never found a supplier who can give him the satisfaction.
And it is this same company which is meant the first of these platforms Gate and that we shall meet after installation. 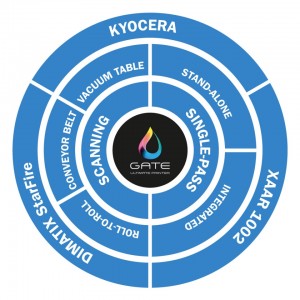 The integration system of GATE

Let we understand, then, to what it is and why it is called ‘digital platform’.
This explains us Davide Ferrari, who in the company has followed the rise it step by step. As illustrated in the circular chart here above, JetSet first evaluates the type of production that the client has to make. Following the print media – cardboard, wood, ceramics, or fabric – and the level of productivity and quality required – and if he requires test or industrial production and evaluating other variables – the platform is designed and grows around a core that is the ‘concept’.
Starting from the core, Gate can be built in ‘scan’ or single pass’. Once you established the main use of the inkjet machine, JetSet proceeds to the composition of the elements, choosing between fixed top with suction, belt or roll-to-roll. Then will be decided whether the machine will be stand alone or integrated in a production line.

At this point printheads will be selected depending on the type of printing: and they are currently Xaar, Dimatix or Kyocera, chosen following the inks and the colour profile: four-color, six-colour or four process colours with adding coating or one or two whites also for 3D effect, and so on.
The digital platform Gate is patented even in its conceptual part, because therein lies the real news, even though its construction there are other components that make patented Gate a unique concept, such as the adjustable bar, the distribution system of the nozzles to ensure a uniform printing without solution of continuity (the typical ‘line’ or ‘banding’) and the new adjustment of the heads as a function of the print media and inks. 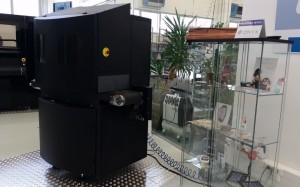 But there is more: the same platform, once built and delivered is not ‘frozen’ but can be modified later to suit different media and inks. A complete change of the inking system, which applies the concept dual ink supply, it only takes 30 minutes and this enables the printer to switch from one product to another.
«Everything is created and developed – concludes Ferrari – as a system integration, then JetSet do not define themselves as a machine builder, but an ‘integrator’ in order to facilitate the switch over of all industrial printing systems.»
In addition to paper, cardboard for a more personalized stationery also in print media, this digital platform integrates seamlessly in the printing of ceramics, wood, glass, or gadget objects. Especially for textile printing, as we saw in ITMA, the whole industrial textile printing is moving inexorably towards the digital, but «we need to consider the entire process – reiterates Sergio Ferrari – and not the single machine if you want a smooth transition from analogue to digital.»
Ultimately, we think we can say that having a single platform Gate, with the appropriate components, it is like having in one platform, two, if not three, machines.